So after a week of almost constant sunshine Saturday decides to be wet, windy and miserable. Wakefield is damp and grey when we arrive but beginning to brighten up both weather-wise and event wise.
Long Division Festival started in 2011, is an annual event (although organisers took a break from duties in 2017) and over the years has played host to The Cribs, British Sea Power, The Fall, Gang of Four, Ash and a whole load of others. Spread over five days the festival features a diverse range of music, spoken word and exhibitions with the main events being Friday, Saturday, Sunday. The heart of the festival is Saturday which saw almost 100 performances and events taking place across the city many of which were free to see.
My focus was bands. Starting off in Warehouse 23 openers Cape Cub deliver an acoustic set of heartfelt, laid back songs full of powerful lyrics. Brilliant guitar picking and subtle keyboards produce a chilled out vibe, tunes for romantic summer evenings. Stand out songs included ‘Flowers’, ‘Keep Me In Mind’, ‘Closer’.  Melodies that tug at your emotions with Chad Male’s deeply personal vocals driving home the importance of being there for those you love. 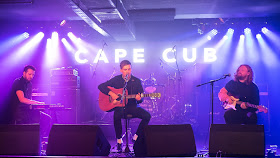 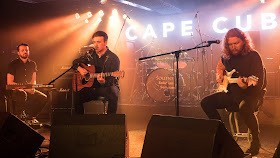 Mush provide a complete contrast. Artrock, post punk. Call them what you like. With influences such as The Fall, Sonic Youth, Pixies and Television the volume in Warehouse 23 shoots up. Mush bang out a superb, repetitive thumping beat. Verlaine influenced guitars and vocals that are not so much sung as spoken/yelped. They’re young, they’ve got attitude, they deserve to be going places. I’m hooked in from the word go and it’s a close call between staying for their whole set or a walk across town to see The Membranes. In the end the thought of seeing The Membranes, with a choir, in the cathedral drags us away.

Located right in the city centre people have been offering their prayers and praise in this holy place for 1000 years. The cathedral is a stunning building. Bright, beautifully lit, stained glass windows and superb acoustics. Whoever decided to bring The Membranes along with the BIMM choir to this venue deserves an award. What follows is nothing short of perfect. As always frontman John Robb darts around the stage, bass held high, staring at the audience, stopping to hold arms aloft but this time it’s in a perfect mirror image of the statue depicting the crucifixion of Christ high up behind him. The setting seems to add extra energy to what is already a powerful band as they deliver a set focused on 2015’s magnificent ‘Dark Matter / Dark Energy’. The slow, menacing bass and eerie guitar of ‘In The Graveyard’, the pounding, manic onslaught of ‘Do The Supernova’, the howling vocals of ‘21st Century Man’. All are taken to another level by the presence of the choir whose ethereal, angelic and trained voices back up the incendiary noise being pushed out by The Membranes themselves. This was a special gig. Exhilarating. One that no one present will ever forget.

Back at Warehouse 23 we catch the last two songs from Wakefield/Leeds trio Drahla. Luciel Brown, Rob Riggs and Mike Ainsley spit out minimal, dark, post punk, with a heavy bass sound. ‘Fictional Decision’ shows a distinct nod to The Breeders / Pixies whilst ‘Circuit’ builds from quiet(ish) beginnings into an unrelenting wall of noise of thrashing guitars. Just two songs seen but wow they impressed. I’m just thankful The Membranes were as good as they were or I’d be having serious regrets about not seeing more of Drahla.


The dramatic, complex, alternative rock of Glass Mountain takes us through the next hour or so. Usually backed up with captivating projected visual displays the band today rely solely on their soaring guitars, subtle keyboards and sorrowful lyrics to hold the crowds attention. And hold it they do with those present clearly enjoying what Glass Mountain produce.  But every band can’t please everybody and Glass Mountain just don’t do it for me.

Handing out plastic rings with LED bulbs to most of the audience we are introduced to Galaxians. With uplifting, disco, funky tunes Galaxians started life in 2012 as duo Jed Skinner (synths) and Matt Woodward (drums) and recorded a number of boogie dance instrumentals heavily influenced by the New York disco scene. Joined in 2016 by Emma Mason on vocals tonight they deliver a set that turns Warehouse 23 into a room full of dancing club goers. Plenty of programming goes into their music which means they deliver a lot from a minimal set up. Mason’s vocals are powerful and with some gentle swaying and a beaming smile she has the audience on her side within minutes.

The first stage invasion of the day, albeit a mini one lasting only a few seconds consisting of just 3 or 4 punters trying to clamber up for a bit of a dance and being rapidly removed by security, comes part way through the charming indie pop of Cud. Darlings of any indie disco of the late 80’s and early 90’s and much loved by the late John Peel, Cud’s guitar drenched, bass heavy sounds come with a distinct element of funk. Todays Cud consists of original members Carl Puttnam on vocals, guitarist Mike Dunphy and bassist William Potter. Joined in 2012 by drummer Gogs Byrn they deliver crowd pleasing classics that don’t just focus on singles. ‘Purple Love Balloon’, ‘Only (A Prawn in Whitby)’, ‘Hey! Wire’, ‘’Robinson Crusoe’ and ‘I’ve Had It With Blondes’ feature amongst a set that has the dedicated in the crowd lapping up every note and word and that I’m sure convinces a few more that Cud were, and still are, a band worth listening to and venturing out to see.

Evil Blizzard walk on stage to what is now customary boos and chants telling them how shit they are. As a live band they’ve built something of a legendary reputation. Four bass players and a drummer who sings. And a machete wielding pig. And a giant with head and face covered with a sack who gleefully wipes your own head and face with a mop before handing you a card telling you to seek medical attention. Except tonight it isn’t like this. Tonight there’s no pig. And no Mopman. But there are now five bass players which only serves to intensify the pounding introduction to ‘Sacrifice’. With a new album out this week we’re ‘treated’ to the minacious ‘Unleash The Misery’ – body pounding, rumbling, repetitive deep bass overlaid with some seriously high pitched noises and the sight of five bass wielding, horror masked characters from a nightmare you just want to forget clobbering around the stage with no regard for whether or not they slam into each other. New single ‘Hello’ is over 4 minutes of slashing guitar and wailing vocals but, as proved by it’s appearance this week on 6Music, with much more commercial appeal than some of their earlier material. The seriously sinister ‘Fast Forward Rewind’ builds from a perfectly danceable albeit malevolent beat to a cataclysmic climax. Add in ‘Slimy Creatures’, the always brilliant ‘Are You Evil?’ and finally the chaos of ‘Red Box’ during which bassist number five – Embrace’s Steve Firth – is loaded up with all five instruments. His masked face says it all, “WTF?” I know I’m supposed to say the last hour was utter shite, complete drivel. But I can’t. Because it wasn’t.


The Lovely Eggs also have a new album out. ‘This Is Eggland’ delivers over half of tonight’s set and that’s no bad thing. Opening with ‘I’m With You’, a perfect blend of punk rock guitar, rhythmic drums from David Blackwell and Holly Ross’s wonderfully sweet vocals. The chugging guitar of ‘Witchcraft’, the chants, banging drums and full on guitar racket of lead single ‘I Shouldn’t Have Said That’. It’s hard to believe this is a duo from the sonic noise they produce. A duo celebrating their 11th wedding anniversary tonight. A duo who, when singer Holly isn’t shaking her head, pulling off some leg movements most ballet dancers would be proud of or leaping round the stage, share some knowing looks, looks that emphasise that if all else fails in the world they’ve got each other. It’s not all new album promotion though. ‘Magic Onion’, ‘Goofin Around In Lancashire’ give us a taste of past tunes and, while much of their set sticks to that perfect combination of sonic guitar riffs over a repetitive beat topped with singalong lyrics, things slow down with crowd pleasers ‘People Are Twats’ and the genius that is ‘Fuck It’. There’s a lot of people here who clearly adore The Lovely Eggs and a decent mosh pit develops leading to a few becoming clearly agitated with the pushing, bouncing, joyous mass behind them. Rather than asking people to calm down Holly announces that she “fuckin’ loves them” and then ever so nicely invites those who feel uncomfortable to sit and watch from the photo pit. What a perfect solution and a perfect end to a great day.